The acid house sound that blew up in the late 80s and early 90s is having somewhat of a renaissance in clubland at the moment, with many producers in 2011 referencing this hedonistic period in their productions.

In this video Danny J Lewis shows you how to recreate the sound, initially made famous by the classic Roland TB303 bass synth, in Ableton Live.

It seems that once again acid is very popular. Now, when I say acid, I’m talking about the Roland’s TB-303 sound. This is having a renaissance at the moment in Clubland. In fact, I remember when it first was popular back in 1988 when the whole kind of acid warehouse party kind of vibe was going on. So, it was a revolutionary sound at the time. Funnily enough, it was a failed product for Roland. It was designed to replace the bass player in a band, but it ended up being picked up by guys in Chicago and Detroit in second-hand music stores, where these things were actually just sold off very cheap. They were playing around with these things, pushing buttons, and that whole style of music was born because of that.

We’re going to emulate the 303 flavor, and we’re going to do that using Ableton’s analog synth. So, I’m going to show you some of the key things
that are unique about the 303. Of course, it’s not going to sound exactly the same, but we’re going to get something sounding quite similar. I’ve got a little pattern in here, and the 303 itself actually had a step programmer on it, which is one of the reasons why it had the unique vibe on there. So, you were pushing buttons to create the actual notes. But I’ve got a sequence here just to keep things moving fast for the demo. So, the analog, let’s bring it on, and the default wave form here is a sawtooth. There were two wave forms on the 303. Let me just show you the backing first before we go to the acid.

It’s just got that contemporary, really quite dark backing. This is a kind of track where the acid is having a bit of a renaissance, and you’re not necessarily finding the house kind of beat where you’ve got a kick on every beat in the bar. You might have something that’s quite broken, or quite two- steppy where the acid is going on top. Let’s take a look at what we need to do to get that acid flavor. Let’s have a listen to the notes as they are. So, it’s sounding really bad. The first thing I’m going to do is go to the amplifier envelope and reduce that. Let’s just have a listen to how that’s sounding now.

Now, the key to the 303 is the fact that it’s a mono synth. It’s only one note can play at once. So, I’m going to come over here, click on the volume section, and we’re going to drop down the amount of voices to mono. The other thing I’m going to do is turn glide on. So, let’s have a listen to how that works. So, you can hear the pitch bend going on, and that’s because of the glide. We can make that occur fast or slowly. About 50% is working nicely there. So, that’s one of the key elements of the 303. It was the bending of the notes, so the glide occurring between two notes that creates a really interesting vibe.

The other thing I’m going to do is turn on the filter. We’re going to just stick with the 12DB proactive low-pass, and we’re going to crank the resonance up. That was one of the very distinctive things about the acid sound, and just modulate the filter frequency manually for the moment. See how that sounds with the backing. So it’s sounding nice. Now, on the real 303, we also had the ability to adjust the way the filter works with the filter envelopes. So, I’m going to bring this up and just show you here, the possibilities if we make this decay shorter. That’s a very common sound there, with the shorter decay. The two wave forms on the 303 were the sawtooth and the pulse wave, so I could switch to the pulse wave over here. Let’s have a listen to that. Take the decay of the envelope out.

Let’s take the envelope modulation off as well. So, I’ve gone too far there. Here we go. But this isn’t the kind of flavor that I want. I want something a bit more aggressive, a bit more in your face. So what we’re going to do is we’re going to add some distortion. So, onto the audio effects, and we are going to put some overdrive on. We’re going to widen the amount of frequencies here. It’s going to bring the drive up. It’s going to take the dry/wet mix 100%. Let’s have a listen to that so far. Now, obviously that’s gotten a lot louder. So, just for the moment I’m going to stick on a utility. I’m going to bring the game down, and let’s have a listen. Yeah, that’s sounded good, but I’m going to flip back to the sawtooth and we’re going to add an effect. Let’s stick the ping-pong delay on. Let’s take the feed back down, dry/wet mix down, and I’m just going to shift the range of frequencies and the delays working on just a bit here. Let’s have a listen. Yeah, that’s working nicely.

You’re starting to see here that we could build up a rack that becomes a sort of virtual 303-style synthesizer. The other thing that I want to do, just to twist things up a little bit is to find the media effect. I just want to stick a random to the left, and I’m just going to take the bounce up a bit and see how that sounds. I’m going to take the scale up. So, now the random media effect is basically giving us some extra notes that are different to the original sequence. We’ve got some interesting flavor there. The next thing to do is to put all of these in a rack, and then set up some macros so that we can get tweaking those and get them into the sequence there for a performance. 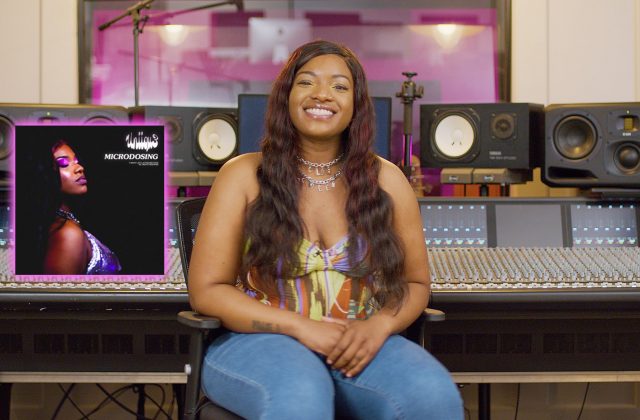 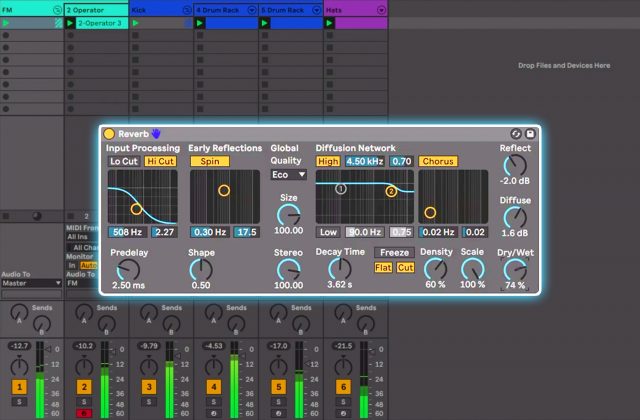