Noisia’s unique sound blends classic drum and bass  and breakbeat rhythms with exquisite modern sound design. Since they formed in 2003 they’ve released on Skrillex’s OWSLA, deadmau5’s Mau5trap and Jay-Z’s Rocnation as well as soundtracking and producing across many other projects. Known for their attention to detail, their sound is a unique combination of detailed programming and layering, centred around powerful drums and drops.

With a new album on the way, we thought we’d catch up with them to find out more about their production process. If you’re a fan of the Noisia sound and want to go in-depth with your own sound design, our online Diploma course covers the topic in-depth, as well as modules on mixing, producing, mastering and more. Find out more about our Diploma course here. Noisia play Bristol’s Sequences festival on Sat 23rd July – ‘Outer Edges’ is out Sept 16th.

Outer Edges is your first album in six years – why did you spend so long working on this album?

Martijn van Sonderen: “We didn’t! We’ve released a collaborative album with Foreign Beggars as I Am Legion in 2013, an eight-track EP called ‘Purpose EP’ in 2014 and another collab EP called ‘Dead Limit’, with New Zealand’s The Upbeats last year. Among other singles and EP’s. After all of these we thought the time was right to do another multi genre Noisia studio album.”

How did the album process work between the three of you? Do you have defined roles when producing?

“Not really, all three of us started tunes that made it onto the album. We kept a Google Doc containing notes on progress and comments to one another. After the initial idea stage was over and we got to the real decision making part, we tried to be in the same room working on all the tracks.”

As you upgraded your studio over the six years, were there any new software or hardware bits that ended up making a big impact on the record?

“Compared to what we used on ‘Split the Atom’, there were quite a few new things that made an impact. The biggest change being the ridiculously more professional rooms we call our studios. Also, the fact that they were built with the ATC 110 speakers in mind, which makes the monitoring very accurate. Besides that, we love Steve Duda’s Serum VST, the Melda and Valhalla plug-ins and all the upgrades that were done to all the plugs we were already familiar with like NI Komplete, everything iZotope and everything Fabfilter.”

One of three of Noisia’s custom built studio in Groningen, The Netherlands

Your known for creating a ‘wall of sound’ in your productions. What’s your advice for creating a huge sound both for individual elements and for the mix as a whole?

“The most important thing is to pick your elements. There’s no point just randomly throwing all kinds of sounds together and then trying to blow everything up. You have to deal with the limitations you have within the spectrum and stereo field. For individual elements it’s good to check what frequencies are not necessary for this particular sound to work in your mix, so you can EQ them out. Another important factor is something people don’t always consider: arrangement, both on a micro and macro level.

“Besides having a loud mix, the way your track is structured can suggest it’s louder or quieter too. For example, if you have a lot of bass right towards the end of your build-up, the drop isn’t going to sound as bass-heavy as it would when you’d have none or a little low end right before it. But then you also should consider the fact that some frequencies are perceived louder, so you don’t want to just have loud mid and high frequencies in your build, ’cause the overall impact of the drop will be less. Everything relies on context. Also, we use a limiter on our master buss from the get-go on almost all tracks. This is a tool to keep your mix in control during the process of writing the tune.”

What’s the most important thing you’ve learned when it comes to sound design?

“This ties in nicely with the previous question. Sometimes sounds can sound very cool and smooth in a mix as part of a track, but sound pretty bad on their own and vice versa. There are no tricks to make every sound work or sound cool in any track.”

How do you separate the scientific processes around frequencies, phase issues, EQ settings etc, with the more creative and compositional side of music making?

“It really depends on what the idea behind a track is. Sometimes we start a tune from some kind of technical angle, where we want to get sounds to play their part perfectly before we think of the vibe of the track. Other times we start with a sample, or an intro for example. Then we generally need to work on the mix and technical elements a little further down the road.”

What are your go-to distortion plugins / hardware and techniques?

“I mostly use iZotope’s Trash 2 for distortion, as it’s versatile, multiband and I like the interface. Some other plug-ins we use are Fabfilter Saturn, NI Guitar Rig and Melda’s Waveshaper.”

How did the the new record differ in terms of your approach to production?

“We haven’t really paid a lot of attention to how playable the tracks have to be in a DJ context. So, we focused primarily on how we wanted them to develop and sound. This is something that we generally consider more when releasing singles or EPs.”

What would be your advice to any bedroom producer looking to achieve a huge sound in clubs?

“Getting a bunch of reference tracks that you think sound good in club settings is always a good idea. A bunch because every sound system sounds different, so there’s no track that will have the same impact everywhere purely in terms of sound.” 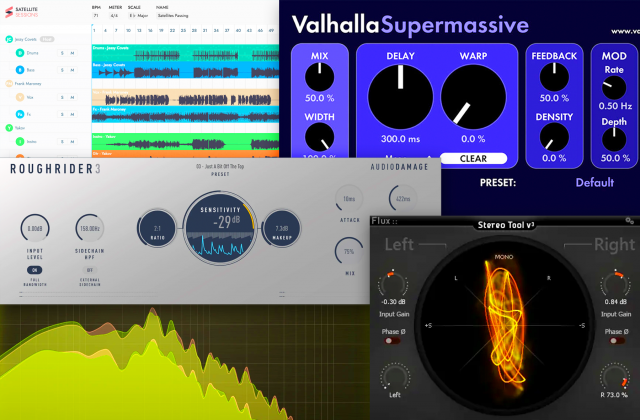