You may not have heard of Thomas Rousell but you almost definitely will have heard his music. Over a 17-year career he has worked on orchestral arrangement with the likes of Jeff Mills and Justice, composed for adverts with companies including Disney, Sennheiser and Volkswagen, and orchestrated shows for fashion brands like Dior and Chanel. Recently he has turned his considerable talents to his own music as Prequell, drawing on his unparalleled experience in both classical composition and electronic music-making to make ‘The Future Comes Before’, out now via Pantheon Musique and Mercury Music. We caught up with him ahead of his album launch a couple of weeks ago to chat about the record, his long history and what advice he has for young composers. If this inspires you, check out our Music Composition Certificate.

Hi Thomas. Thanks for taking the time to speak with us. I wanted to start by saying congratulations on your debut album as Prequell. What sparked your move into recording under that name from what you have been doing over the years before?

I started to work in music quite young at 20. And I didn’t have the time to think about my music as I was working for shows, and for Chanel, Dior and other brands, or movies in France. It was really cool but always at the service of a project. Maybe 15 years passed before I thought ok I have to propose my music, and I started to think about Prequell. The Prequell name was actually a way for me to go back to my origin. Who am I as a musician?  So I went back in my memory to Massive Attack, Craig Armstrong, Bjork and even John Barry, everything which made me as a musician and a music lover. I tried to refer to the emotion within myself from when I was a teenager.

Given that you wanted to go back to the beginning, did you have to try and unlearn a lot of stuff and was it challenging to work without a brief?

Yeah totally. [Working to a brief] gave me a kind of frustration in that I would just want to propose something new, and employers always talk about references: that kind of music, that composer or movie. For my project, I didn’t want to have any reference in music, so I took pieces of art and organic material like wood or metal as my references. I wanted to be free.

So how did the creative process work? If you start with a material like wood – where do you go from there?

The idea was not to tell a story but to keep it for me. Of course, I had a lot of images in my head when I was composing and each track has a strong emotion or strong reference for a piece of art or material. But for the story, I didn’t want to have real titles for the tracks, it’s just part 4, part 3 etc. Just to stay a bit mysterious and encourage the listener to have their own images in their heads.

When writing the songs, where did you start and how did you build the tracks? Because I know you had live instrumentation in mind from the beginning.

It’s maybe four or five steps. I started with the electronic parts on my own in my studio. Normally I have to make a demo when working in fashion or film, but for Prequell, I didn’t have to do it. Being free of the demo gave me the opportunity to be more ambitious with the writing and the orchestra as I didn’t have to make any placeholder sounds. Then I went to record all the small instruments, like drums, guitars, or mandolin. The third step is in the studio with the singers, the fourth is with the orchestra, and the last was the mix in London.

I feel pretty lucky because I imagined the tracks in my head in the studio but with each step, the people involved, like the singers or the orchestra, took the track and sent it higher than I imagined. Even the mix took it higher again.

I wonder if we could take it back to the beginning. You started working relatively young – but how did you get into music in the first place.

My father taught me how to write and read music when I was 3 so I don’t remember. Then I just wanted to learn every instrument, I was very excited. My parents had to tell me to stop and be quiet! I started to compose very early, 12 or something, and my first big piece was when I was 20.

It was actually very Prequell style, with 50 instruments, a choir and electronic elements. That was in 2000. Thanks to this I got to work with Justice. I was 15/16 when Daft Punk released Homework, so I was into the clubs on the weekend and doing composition during the week. For me it was natural to combine everything.

Actually it’s just a matter of words. I know people will call Prequell a crossover between classical and electronic music, but for me it’s not classical music at all – of course, the London Symphony orchestra is a classical orchestra, but I just tried to take what for me is the best of the two worlds – electronic and orchestral. With electronic music, it’s machine music but very poetic. The orchestral side is more melodic, with more nuances, more dynamic, and the emotion comes from other stuff.

For me, Techno music is very emotional, and orchestral music too, so I took what makes each moving and emotional for me and I took these two worlds to make the most emotional music as possible.

Our students would be very interested to know how you got into the world of fashion and film, and what advice would you give an aspiring musician looking to do so?

When I was 18, I was playing the violin in classical orchestras, and I worked with Lalo Schifrin, the guy who composed the themes for Mission Impossible and Dirty Harry. He was the conductor, and we were playing his music and had masterclasses of composition with him. I used to ask him for advice, and the guy was so talented and charming. He gave me the best advice ever: he asked me what I wanted to do with my life, and I told him I wanted to be a movie composer. He said: “don’t say you want to be a movie composer. Be a composer first, compose your music and people will come to you if they like it. If you are just a movie composer, you will forever do what they ask you to do, but you have to propose your own thing to be successful.”

Maybe after 15 years I learned the lesson! But yeah now I think about that moment, it’s stuck with me.

When I came to Paris, at 20 and around 22, I was very lucky as I was able to work for other guys. As a ghost-writer, for the movies, etc. I started to work for Chanel, and Dior through chance meetings, but I was just writing music with my heart, and then you are lucky enough to meet good people. Take the advice is from Lalo Schifrin: do your own thing, and wait for people to come to you, instead of trying to do everything.

Thanks so much for that Thomas. Before you go, can you tell me what’s in store next?

I’m working on the live performance right now. We have 3 performances in January in Paris, and each time the plan is to arrange the orchestra in a new way. Like I did with Dior, with the ‘In A Line’ orchestra, I did something similar along the river in Paris using a little trick to conduct without having everyone seeing me. Now I have that, I can make them play in all sorts of positions, so each time it will be an orchestra, but not like you’ve ever seen before. That’s the idea.

Want to learn more than just composition?  Take a look at our comprehensive BA (Hons) Music Production & Sound Engineering Degree in London, or if you live elsewhere try the online course. You could learn all about writing for singers on our Songwriting Course, or try our short course on Electronic Music Composition for an introduction. If you have any questions get in touch via our contact page. 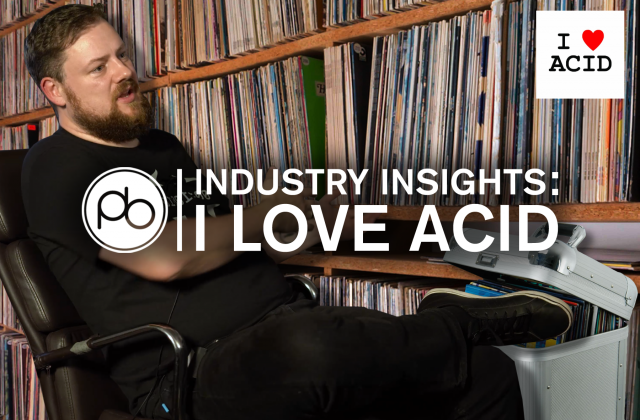 Industry Insights: How to Run A Vinyl Only Record Label With I Love Acid