We recently held a guest masterclass and open house at our studio complex in Los Angeles with George Wiederkehr, a composer/multi-instrumentalist with 15-years of experience as a producer/engineer, and Matt Lara, a Certified Native Instruments Product Specialist. The workshop in question had a specific focus on the 10 Secrets of Mixing and now, for those of you who were unable to attend, we can reveal exactly what was covered in a guest blog post from George Wiederkehr himself. Without further ado, jump into the 10 Secrets of Mixing below and RSVP to our next LA Open House here. 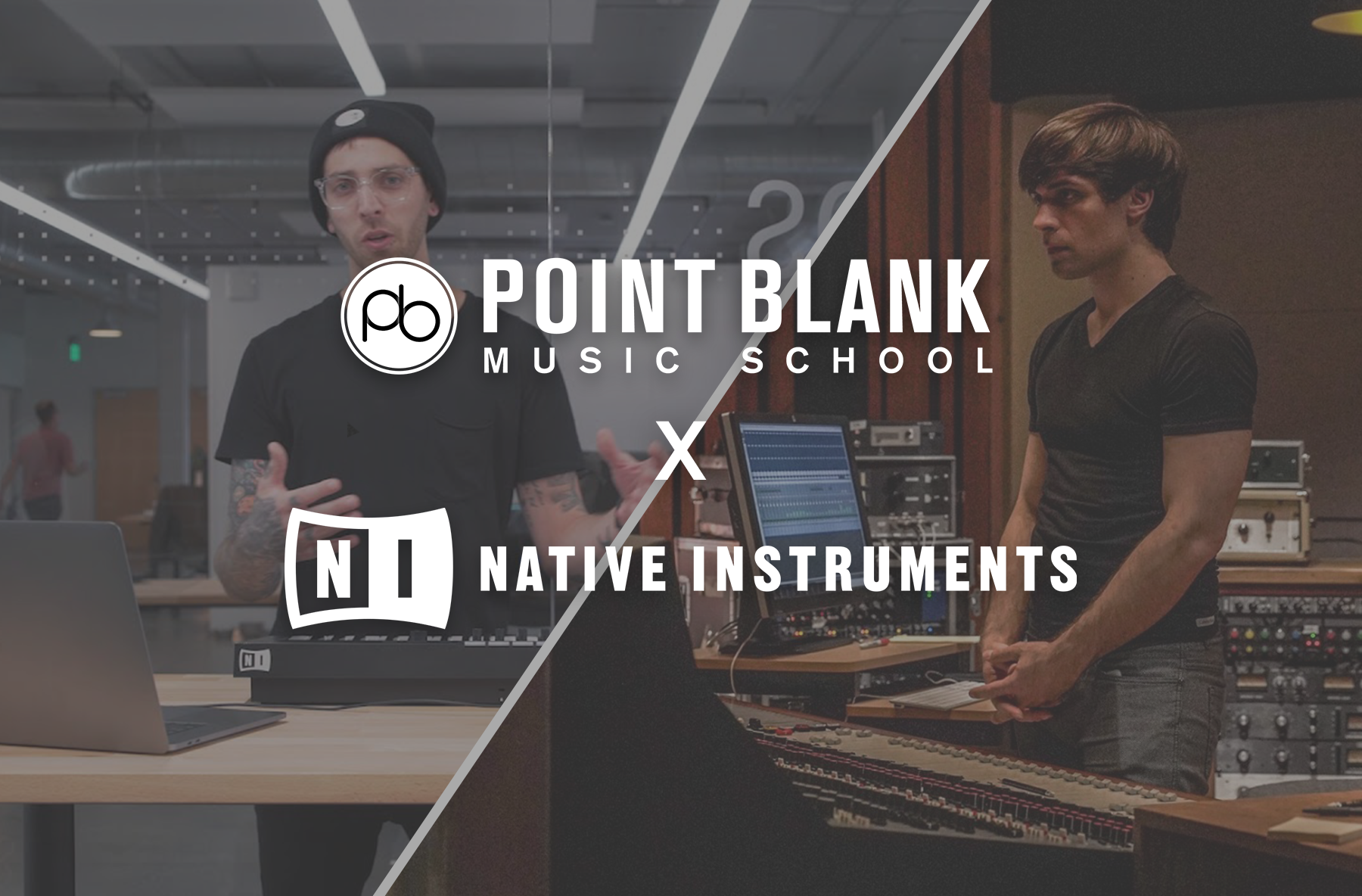 We’ve all encountered the question at some point: If you could go back in time and talk to yourself from ten years ago, and had to give yourself any piece of advice, what would it be? More on topic, let’s say that advice had to be music or career-related. What then? Could you narrow it down to one single piece of advice?

I couldn’t. I’m too verbose. Had I the opportunity to talk to myself as a younger, starry-eyed rookie producer and engineer, navigating through blind intuition the complex, half-technical and half-artistic landscape that is music production, I’d have a lot of trouble narrowing it down. There’s so much to talk about, so many hats the modern musician has to wear. What would I say? How would I weigh out which bit of advice would have the biggest impact?

Well, luckily, I didn’t have to narrow it down to one, so I’ve narrowed it down to ten instead. Ten ‘Secrets of Mixing’. They’re not really secrets, if I’m honest, but ten ‘Pieces of General Advice About Mixing’ doesn’t quite have the same ring to it. Check out the first 5 secrets to mixing here and follow on below for the final five.

6. The closer to the original source, the more important it is

Unfortunately, that super-duper cool vintage German condenser mic isn’t going to make anyone sound better practised. That Telefunken M80 that you bought for snare drum recording on the obscure recommendation of a random commenter on a 40-page Gearslutz thread isn’t going to make a bad snare drum sound like a great snare drum, or a poorly tuned drum sound like it was properly tuned. Change the heads, tune the drum, change the drum itself. Change the drummer. Change the room your new drummer’s playing in. Give them different drum sticks. Give them a pep talk. Tell them to go home and practice after realizing the pep talk didn’t make a difference. Most importantly, take it from Steely Dan: Getting everything correct at the source, or as close to the source as you can, will yield much better results than trying to fix it further down the line. If there’s a problem with your sound, always, always consider improvements as close to the source (or to the source itself) as you can, before trying a different mic, different preamp, different compressor, different plugin, or whatever else.

8. Find the emotion in the music

It’s less obvious than it seems at face value. Of course, music feels emotional to listen to. Why else would anyone listen to it? What is it, though, that makes you feel that emotion? Is it the lyrics? If so, are there a few specific lines that carry more weight than the others? Is it something in the music that is doing it? Is it a certain chord within the verse’s chord progression that feels the most emotionally satisfying to bear witness to? Is it that deceptive resolution to that minor chord? Is it one particular passage in the melody that hits a note that is beautifully unexpected, and just the right thing the melody needed at that time? Is it the entry of the synth pad in the second chorus? The vocal harmonies? Is there a certain ‘musical contour’ to the whole song, which reaches its apex at a certain point in the song? The last chorus maybe? Could you draw that contour if you needed to, and note the placement of that apex?
What is it that makes you feel what you do? Where is the thing in the music that keeps you coming back to it? Where is its source located? The greatest musicians were said to tap into this, and tactfully weave these emotional glimmers into a compelling light show for the listener. Alfred Cortot, for example, an early 20th century Romantic-style pianist, was said to ‘find the opium in the music’, grabbing ahold of the notes and passages that really tugged on you, drawing them out and putting weight on them, and extracting them for every bit of expression that could be artfully done.
Do that, but with your engineering, or your production, or your mixing, or your performance. Find what makes the music emotional, and draw it out into the open, using whatever techniques you can, for your listeners to witness.

9. Overdo everything, just a bit

There is a crucial difference between being the creator of the music, and being the unprimed listener of the music, and it is both an advantage and a disadvantage: The creator already knows what the song should feel like, and already knows what emotion the music was crafted in reverence of. The creator already has the emotion inside of them, it has already been discovered, and it’s already being experienced during the creation or performance of the music. So, when the creator of the music wants something to sound a certain way, and more crucially, wants something to feel to a certain magnitude, they build the music up so it feels just strong enough, or just small enough, just dramatic enough, just subtle or intimate enough, just heavy enough, just light enough, to where it feels just right to them.
There’s a disconnect, though, between the creator’s experiences and the new listener’s experiences. They have no idea what the song’s intended emotion is supposed to be. They don’t know what to feel yet and don’t know the emotional ups and downs of the song like the creator of the song does. And, with this disconnect, every decision to push the music in a certain expressive direction loses just a bit of its potency: Those sections that felt just big enough to you as the creator, didn’t feel quite as big to someone who doesn’t already have the intended emotion inside their head, adding onto the experience of the music. Those small, intimate, quiet sections don’t quite have the same small, personal quality to the unprimed listener. That big climactic section in your last chorus won’t sound quite as big to a new listener.
If you want the listener to experience something to the magnitude that you intend, push everything just a bit further than you normally would, and ‘fill in that disconnect’ in the emotional experience between the emotionally-knowing you, and the emotionally-undecided new listener. If you want something to sound small, make it sound tiny instead. If you want something to sound big, make it sound huge instead. If you want that synth bass to sound gnarly, make it even more gnarly than you planned, make it gritty and aggressive and fuzzy. Make sure you’re getting your point across, and not just as the performer, but as the producer, the arranger, the engineer, and anyone else involved in the creation process. Overdo everything, just a bit, maybe just 30% further in whatever direction you intended, and your listener will feel it exactly as you intended.

History doesn’t remember who was best, it remembers who was first. Who is best anyway? Is that even possible? Is it even something worth striving for? Competent, yes- Be as capable as you’re able to be, and constantly push the very limits of what you can possibly achieve. Always learn, always grow. But, best? Does anyone really care who was best? The Beatles weren’t the best musicians. They were good, no doubt, but there were better guitarists, and vocalists, and lyricists, and drummers and bassists out there at the time. What made them special is that they and their producer were first to do what they did, the first to do the “Beatles” thing. Eddie Van Halen wasn’t the technically best shredder, but he was one of the first, one of the pioneers, and was the first to do the “Eddie Van Halen” thing. Michael Jackson, as technically monumental as he was, was remembered because he and his team did something no one else had done prior: They did the “Michael Jackson” thing for the first time ever.
Here in the 21st century, we have near-instant access to huge, huge heaps of music, to music services and music professionals, to skills and talents and minds, from a vast array of styles, cultural backgrounds, instrumental expertise, musical eras and disciplines, and so on. There’s an oversaturation of any kind of music or music professional you could ever want or seek out. So, why would someone come to you? Why would they hire you, or listen to your music? Is it because you’re the best? No. None of us are, and none of us will ever be the best out there, because it’s not possible. There are no clear conditions for what ‘best’ could even be. Instead of striving to be the best of the best, strive to be the best version of you, a first-rate version of yourself, rather than a second-rate version of someone else, someone that everyone already knows. Find a thing that makes you uniquely ‘you’, do it first, and the world will have no choice but to come to you for that particular thing.