It’s a well-known fact that feature film and music go hand in hand. Whether it’s an epic a soundtrack of colossal magnitude or a slow eerie echo that creeps up your spine, a soundtrack can create an unforgettable atmosphere. We could discuss the vibrant and glossy tracks of summer box office hits, but as the days grow darker and the leaves begin to fall from the trees it’s Halloween which is next on the horizon.

Although synthesizers are renowned for sci-fi, the horror genre has utilised these handy bits of kit for more than just jump scares. Be it a sharp jolt of processed strings or a slow gut-wrenching riser which fills your mind with dread, synths and horror were destined for each other. Despite the fact these timeless sounds were created using hardware, the same results can be achieved if you know-how. To find out more about creating sounds like this yourself why not check out our courses online as well as the freebies we can offer.

As it’s that time of year again we have decided to look back at some of the iconic machines which were there to send everlasting chills deep into our souls. So, follow on below to find out which legendary synths made those iconic soundtracks we’ve all grown to dread.

Kicking things off with a classic, Dario Argento’s Suspiria soundtrack is still highly recognised as one of the best scores of all time. It was composed by Claudio Simonetti of Italian prog-rock band Goblin using a Moog Modular System 55 and features enchanting bells in addition to some bewitching percussion. The Moog synth, which was pioneered by Robert Moog, still remains one of the most iconic synths to date.

Where would any Halloween list be without the mention of John Carpenter’s 1978 film of the same name? Using minimal melodies and a Moog III modular System, Carpenter created one of the most recognisable themes of all time. Although a common piece of equipment back in it’s more popular days, one of these is likely to set you back a fair bit.

Created using a Minimoog and an ARP Odyssey, the music for Phantasm is almost as legendary as the film’s cult classic status. It was composed by Fred Myron and Malcolm Seagrave and features an almost classic rock n roll sound which is reminiscent of Goblin’s score from our previous mention Suspiria.

As many horror movies closely relate to sci-fi, Videodrome fits perfectly in this list as a welcomed blend of genres. The OST for this weird and wonderful film was initially created by Howard Shore for an orchestra but reimagined for as a more electronic soundscape. A Synclavier II was top of the list in Shore’s artillery blending a number of gorgeous sounds with those of organic and natural instruments.

In a world where teenagers dreams were stalked by a disfigured man in a grubby black and green striped jumper and a fedora, the soundtrack had to hit the mark with this one. Beginning with much experimentation, distorting his voice through guitar pedals, composer Charles Bernstein finally settled with the Oberheim OB-SX, Roland Juno-106 along with a Roland drum machine, a Yamaha DX-7 and small Casio keyboard.

Unlike many of the zombie flicks we have become desensitised to, George A Romero’s Day of the Dead, along with the soundtrack was a slow burner which built an incredible atmosphere of suspense. Using a Prophet 5, a Kurzweil and a Lynn drum machine the film’s composer, John Harrison, forged a sound which was filled with unexpected melodic grooves.

Heavily influenced by the sounds of the 80s, Netflix’s Stranger Things soundtrack wholeheartedly deserves a spot on our list. Inspired by the sounds of all of the above, four-piece synth act S U R V I V E, used vintage tools to create that vintage sound horror fans craved. Although not a classic, using a Roland SH-101, Korg Mono/Poly and ARP Odyssey the Texas-natives created something which will certainly be remembered for years to come.

If learning the ways of modular synths, how you can recreate these iconic sounds in your DAW of choice, or even getting to grips with setting up equipment for your band practice, here at Point Blank, we’ve got you covered. 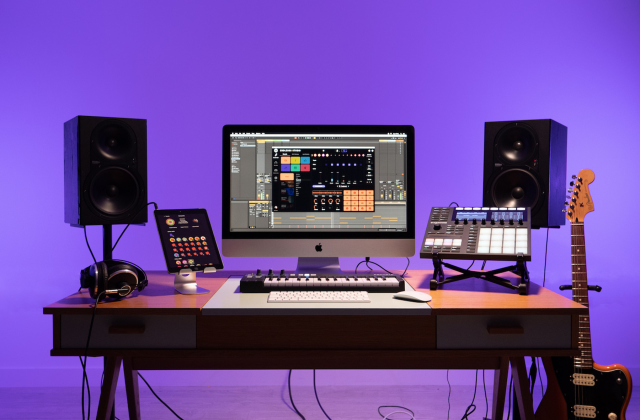