At Point Blank, you can expect to be taught by some of the best in the business. Each of our lecturers are selected to teach our degree courses in London and Online for a combination of talent, music industry experience, and tangible success – which they pass on to you in the classroom. Each is a true specialist in their field, and our faculty in London and Online is no exception. For this Lecturer Spotlight, we will be introducing producer, beat-maker, DJ and Point Blank London lecturer, Simon Mitchell aka Eone. 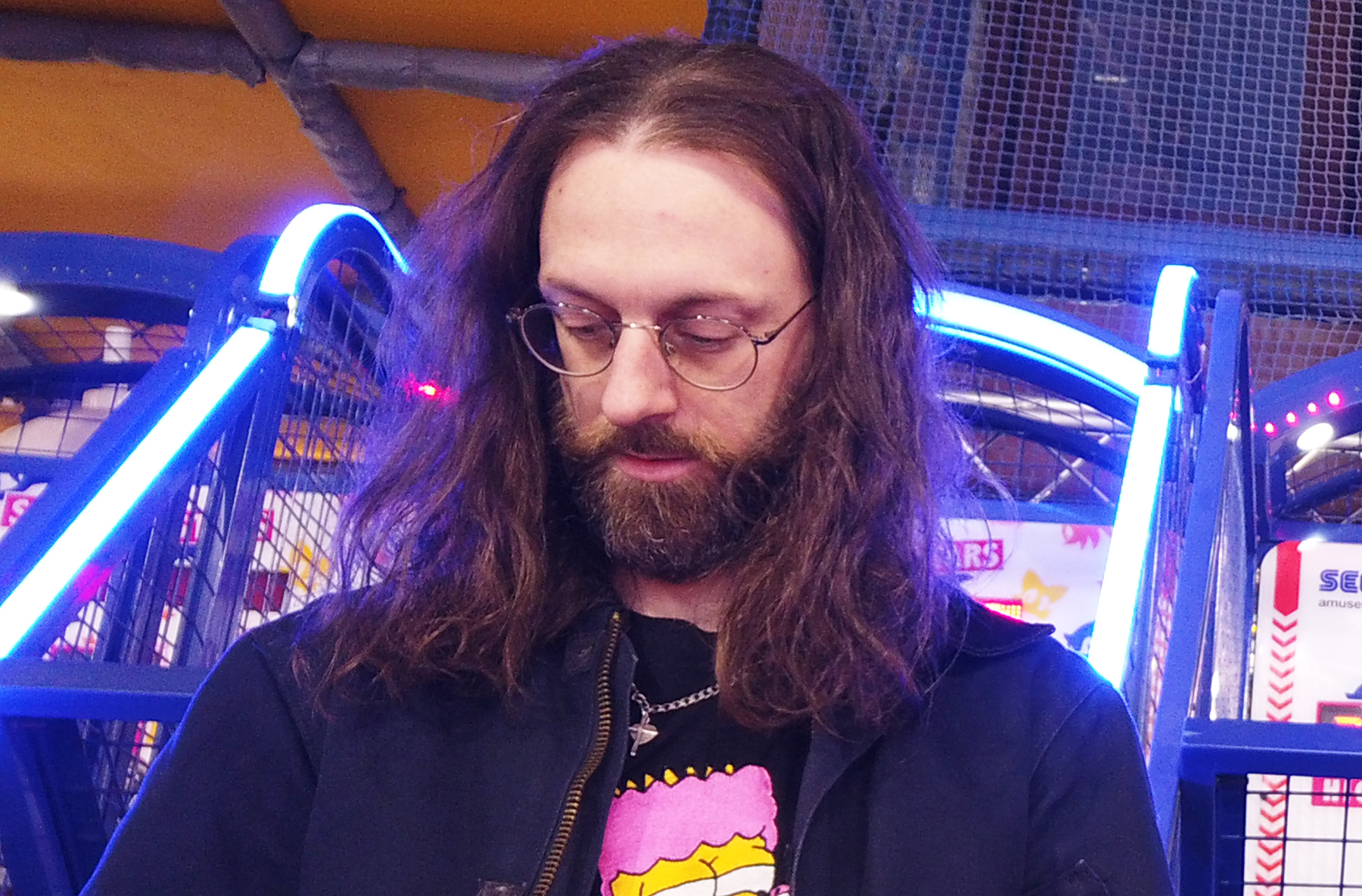 With over a decade of experience, Simon Mitchell aka Eone is a multi-format DJ able to turn his hand to any style at any venue. Based in Brighton but working as an Ableton specialist lecturer at Point Blank Music School, he has a wealth of specialist knowledge.

Having played at a wide variety of venues, ranging from Ministry of Sound in London to Coalition in Brighton, there isn’t a location he doesn’t feel at home in. Eone has also played for some of the most exciting radio stations, such as Rinse FM, Subtle Radio and Threads Radio as well as hosting a show on Brighton’s leading community radio station, 1BTN, for the last 4 years. He continues to create his own music as well as releasing on some of the biggest underground labels, such as Southpoint, Synes, Yume and Plasma Abuse. His music has had great success, with airtime on BBC Introducing, BBC 1Xtra, and NTS.

Alongside this, Eone has also showcased his own sonic and visual installations, created whilst studying for his masters at Sussex University. He also has 7 years of teaching experience, working in schools, colleges and universities.

At Point Blank, Eone teaches Electronic Music Performance (from our degree courses) and Intro To Production. If you’re keen to get in-depth tuition on music making, we’d highly recommend checking out our flagship degree courses in London and Online. Follow on below to find out more about Eone.

Hey Simon, for those who aren’t familiar with you, could you give us an intro?

Hi, I’m Simon aka Eone and I’m a producer, DJ and lecturer from sunny Brighton. I like making neo grime, breaks and other bass-orientated sounds.

What first drew you towards producing and beat-making?

I played quite a few instruments all my younger life and got into DJing in my late teens. I grew up in a small town where there wasn’t a lot on, so I decided to learn to DJ so I could put on my own nights and listen to the sounds I wanted to hear. The progression to producing just felt natural after learning to mix. The inside cover of The Prodigy’s Music For A Jilted Generation was what really drew me in, so love to my brother for always having a constant source of tapes and CDs to steal.

What artists and genres have had the biggest influence on your sound?

Definitely the early pioneers in my life, The Prodigy, Roni Size and Goldie (who’s actually a Point Blank alumni). Also, later greats such as Burial, Zomby, Skream and Wiley. These days my neo-fam are a constant source of inspiration, including the artists Pholo, Gastah, Real Tears, Visene, Mere Formality, Rapture 4D, Gl00my and Time 94. They all have such a unique style to such a unique sound. I’m slowly getting back into the more techno/garage sounds, to which I have Two Shell to thank for that. That and drill music. I listen to so much drill that it’s pretty much all I have on repeat on Spotify. I recently got put onto Slew – he’s an MC that needs to be on everyone’s playlists.

Do you have any go-to plugins or production techniques you think our readers should know about?

Huge amounts of reverb (I see you Cardio) directly on the channel. It’s why I have such a washed-out sound. The new Doubler in Ableton Live’s Phaser-Flanger tool is great too as it gives the most otherworldly tone to anything you run through it. Oh and inspiration from musique concrete techniques as well; the looping of audio that isn’t perfectly in sync makes for such a pleasurable listening experience. Personally speaking, I feel like we live in a sonic world where everything has to be so perfectly polished to the point where it’s painful. It’s probably the reason I was drawn to the grit and gravel of Burial’s sound. Plug-in-wise, I tend to mainly use stock effects but I am partial to Portal, the most glistening granular effects unit, and Initial Audio’s Reverse Plugin. Reverse Plugin is so simple but so effective and a quick way to get your haunted drill pianos and strings sounding even more ghostly.

You’re a very prolific and active producer who puts out numerous projects a year. Do you have any workflow tips for finishing your projects?

I make a lot of music on the train as I travel 4 hours a day for work and do this 3 times a week. You can get a lot done on a train and having just my laptop and not the full studio really forces me to be creative. Quite often there’s no Wi-Fi so you’re quite restricted when it comes to sample-hunting. I also make a point of trying to finish everything I start. Even if I know I’m flogging myself a dead horse, I feel that I’ll gain some experience along the way. In my personal opinion, that’s more valuable than getting any Spotify playlist placement or radio airtime.

I also save all my instrument/effects racks and often drag in channels from old projects that I can use either as a starting point or just to get some drums playing. I find drums the hardest thing in making music despite having experience playing the drums as a child. So, I’ll often remix my own drums and make something brand new. Also, learning to recognise when I’m in a creative mood. Sometimes I mistake this for boredom and restlessness and if I don’t catch it, it’s lost. I will also go through stages of music making. I might not make anything for months and then create 10 tracks in 2 weeks. I try to use that downtime to create promotional material, learn a new skill or simply relax and take time away from the studio. I’m not very good at sitting still, so having something to channel this energy is fantastic. My body won’t take the abuse I use to give it via skateboarding so I need something to keep me occupied.

You work with lots of other artists. What methods do you find best for collaboration?

That’s a really hard one. I don’t think there is a particular method that I could pin down. I try to look at it more as a relationship, rather than a collaboration. I like to know how the other person thinks and likes to work. Sometimes over the internet, it’s just not possible and then when you work in real life, you just want to hang out and catch jokes. With Gastah, the collab flowed really well. We sent each other a few 32s back and forth and it felt like we really built it together. But then I’ve had other collabs where I’ve sent a 32 and they’ve just finished it (cough, Real tears, cough cough) but both are valid methods and the most important thing is the outcome. How does it make you feel? If you feel good about it, it’s a great collab, even if it’s not statistically good. Stats are hugely overrated sadly. People forget that you can just create art and not even upload it. Just create for yourself.

What advice would you give to an aspiring artist looking to break into the industry?

Don’t worry about stats! Don’t worry about being the next big thing. Enjoy making music because it makes you happy. You have to ask yourself, do you want to make cult classics or best sellers? That early The Streets lyric has stuck in my head since I first heard it and it’s kept me grounded throughout the years.

What made you want to become an Lecturer at Point Blank?

Have you been to Point Blank? Have you seen our studios? The teaching staff? The alumni? Haha. I joke but I mean it, the level of professionalism was a major factor. I’ve worked at colleges prior to Point Blank and the staff and students were all amazing but it’s so sad to see the funding cuts and constant struggle that the arts go through in the public sector. I put in a solid 7 years teaching further education and I loved it but I craved to teach more advanced levels. Point Blank ticked that box for me. The level of support that I’ve received from other staff such as Anna Lakatos aka Anna Disclaim and David McHugh has been outstanding as well. It’s just a great environment to be in.

What has been the best part about teaching at Point Blank thus far?

I got to go and teach in Saudi Arabia last year, that was pretty damned cool too. I met a lot of amazing people (Narc, Noura, Baloo, Nasr and everyone else) and experienced such a hospitable culture like no other. As I mentioned before, the level of support we receive as teaching staff and that’s a huge factor. Both the music industry and education sector are constantly evolving, so it’s not a job that ever stays the same. That support is so vital to make sure all tutors understand what is being asked of them. I walk in every day to these amazing offices and I’m always hearing the most cutting-edge sounds as well as just classically solid good music coming from the studios. I don’t think I could ever go back to a normal office job!

What’s next for you? Any current projects that you’re working on?

I’m currently putting together a new live set that I’d like to start touring. I also have quite a few tracks forthcoming, two of my favourites being a feature from my favourite grime MC, Trim (this is the first time mentioning it, so it’s a Point Blank exclusive story!) and also a collaboration I made with Maram of Arabstract. There are also collabs with Noble, Real Tears, Nick Neutronz, a feature from Fugzi, a remix for Lightningboy, an event for Donkline, some more events that can’t be mentioned yet, a new radio show that I’m due to be hosting with Kareful for Liquid Ritual and hopefully finally making a start on my album. I wrote a story two years ago dedicated to brother Matthew. The next stage is writing the music for it. I love concept albums and this feels like the only way I know how to honour his name. So yeah, I have a few things in the pipeline! As I mentioned before I’m not very good and sitting still and doing nothing.

Thinking of joining us at Point Blank? Our flagship degree courses are the main reason prospective music students and passionate musicians choose to study with us. Our degree courses are validated by Middlesex University and deliver an intensive, immersive and practical education across all areas of music production and sound engineering, DJing, vocal performance, music business and more. Got any questions? Don’t hesitate to contact us.